This is the only tour of that includes the Golden Triangle in Northern India,  Gujarat and Mumbai, especially catering to textile and thread lovers, embroidery and quilting enthusiasts! All the accommodation is first class and the tour is designed to be an luxurious, immersive experience so you can learn all about this wonderful sub-continent. Our tour escort, Vanita, is an experienced quilter, teacher who grew up in India and moved to Australia 30+ years ago. Accompanying her on this tour is Deepa Subramanian, Director of Shakti Holidays. These ladies are keen to share their local knowledge and culture with you. They know their way around the sub-continent, guaranteeing you a special experience like no other!

The total cost of this tour is AUD 4980  pp based on twin share; single supplement AUD 1046.  The cost includes all airfares, accommodation, meals, tours and workshops. International air-fares are ex-Sydney, but other departure locations can be arranged. If travelling from locations outside Australia, land only content is also availabe.  More details of all the inclusions can be found here.

The capital of India, New Delhi is a modern, bustling metropolis with expansive malls, hotels, foodie hubs and historic monuments. Designed by British architect Edwin Lutyens, the capital buildings are laid out amidst grand avenues like major capitals around the world. There are many Mughal era monuments scattered around the city as well as ancient and modern temples, gardens, museums and shopping districts. The impressive parliament house and Presidential palace, Qutb Minar, Humayan’s tomb and Lotus temple are just some of the monuments we will be visiting on our day tour. Old Delhi surrounds the capital and is charming as it is chaotic.  We will visit the Red fort and Jama Masjid, and then onto the markets for shopping, Chandni Chowk, and  Dilli Haat. 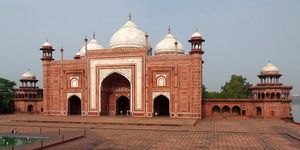 A quintessential stop on any tour of India, Agra was the capital of the Mughal dynasty until 1638 before it was moved to Delhi.  It is the home of the magnificent Taj Mahal, one of the seven wonders of the modern world. A monument dedicated to love, this exquisite building is a mausoleum for Mumtaz, the beloved wife of Shah Jahan, the Mughal emperor, and sits majestically on the banks of the Yamuna river. Constructed in pure white marble and decorated with semi-precious gems from around the world, the building and its surrounds took over 20 years to complete from 1632 to 1653 and employed over 20,000 artisans from many different countries, under the guidance of chief architect to the court, Ustad Ahmad Lahauri. A UNESCO world heritage site since 1983, it received 7-8 million visitors a year! Agra Fort, built by another emperor Akbar (Shah Jahan’s grandfather) between 1565 and 1573 is another must-see destination in Agra. It boasts magnificent courtyards, internal palaces and is essentially a walled city which was the main residence of many Mughal emperors. Another UNESCO World Heritage site, parts of the fort are still being used by the Indian military, but many sections remain open to the public. 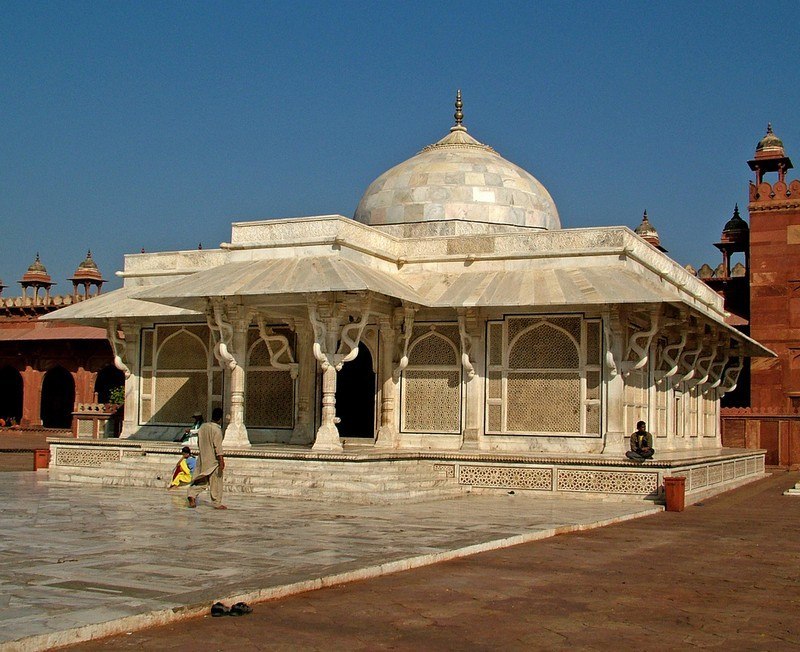 The town, 40km west of Agra is actually in two parts Fathepur and Sikhri, both meaning ‘villages’ and was built in the 16th century by the emperor Akbar and served as his capital for a few years. Constructed mainly from red sandstone, it is a resplendent example of Indo-islamic architecture and showcases the palaces of Akbar’s three favourite wives, a Christian,  a Muslim and a Hindu.  The majestic mosque within is still in use today and the tomb of the Muslim saint, Salim Chisti is still visited by many.  The magnificent Panch Mahal (5-story palace) overlooks the site and the Buland Darwaza is the largest gate in Asia, so this is another must-visit location enroute to Jaipur.

The capital of Rajhasthan state, the pink city is named for the pink-red sandstone monuments that dot the landscape.  This most colourful capital city is home to Rajput kings that ruled in the 17th century. Visit famous landmarks like the Hawa Mahal (palace of the winds) enroute to Amer fort,and visit all parts of this fort. If you don’t mind queuing, you can travel by elephant up the climb to the fort. Visit the hall for public audiences, the hall for private audiences, the mirror palace and the naturally cooled palace (Sukh Niwas. Be enamoured by the intricate patterns painted on the walls and ceiling, there are patterns for the quilting enthusiast everywhere.  Then we visit the City palace and the Anokhi museum.  We will visit the local bazaars, full of colour, sights and smells. In Jaipur, we will participate in our first hands-on workshop of Bagru mud block printing. 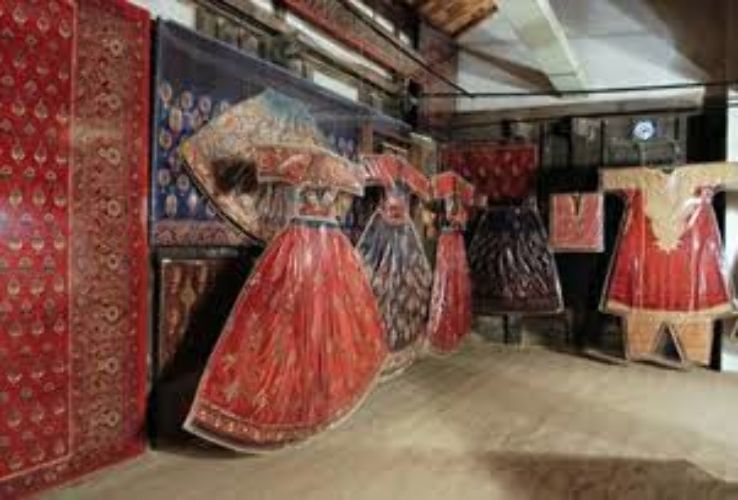 We travel west to the the largest city in Gujarat state which the birth state of Mahatma Gandhi.  The beautiful Sabarmati river flows through the centre of this city and Gandhi’s ashram is set on the banks of the river. The city is famous for its wonderful textiles and the cloth merchants of Gujarat helped put it on the map for international textile traders. A visit the the Calico museum is a must, it was originally the mansion of a textile merchant, but is now home to ancient crown garments from the 15th to 19th century.  Inaugurating the Museum in 1949, Jawaharlal Nehru stated, “The early beginnings of civilization are tied up with the manufacture of textiles, and history might well be written with this as the leading motif.”  We will also taken in other important sights, eat at local eateries and visit the colourful bazaars for some more shopping! 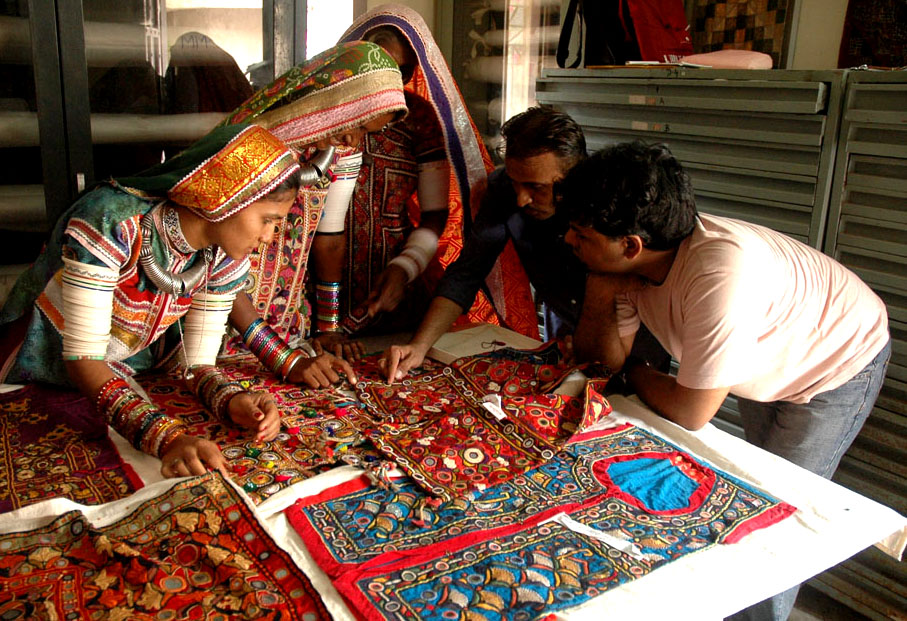 We travel to the city of Bhuj, in the vast arid Kutch  (also spelled Kachchh) district along the Gulf of Kutch, which is home to many tribal peoples. Dotted along the landscape are the villages of the people of Kutch, famous for their fine handicraft, exquisite mirror work and embroidery.  We will visit the Kala Raksha centre which literally means ‘protector of the arts’.  The centre is working hard to preserve the art of these tribal people.  Some of these artists are the last of their kind in the world.  This region is treasure trove of fine arts and there is plenty of shopping to be done!

Our last stop is exciting Mumbai, the financial capital of India, the most cosmopolitan city in the subcontinent and the home of Bollywood.  We  visit the monuments and of course do some more shopping. Famous landmarks are the Gateway of India, the Taj Mahal Hotel, Chatrapati Shivaji Terminus (formerly Victoria Terminus) and many other local sites. We will stroll along Chowpatti beach, where many Mumbaikers come after work for the cool sea breeze and loads of eateries. We will visit the famous Dhobi Ghats where most of Mumbai’s laundry is washed and see the Crawford Market where you can buy the freshest produce in the city.

A detailed itinerary can be found here!

"For anyone interested in the textiles of India, this was a great tour. The museums were fantastic, the workshops were fun, and the cultural sites were enlightening."

"I loved it. They took care of all the practical details so we could concentrate on our workshops. That was so needed"